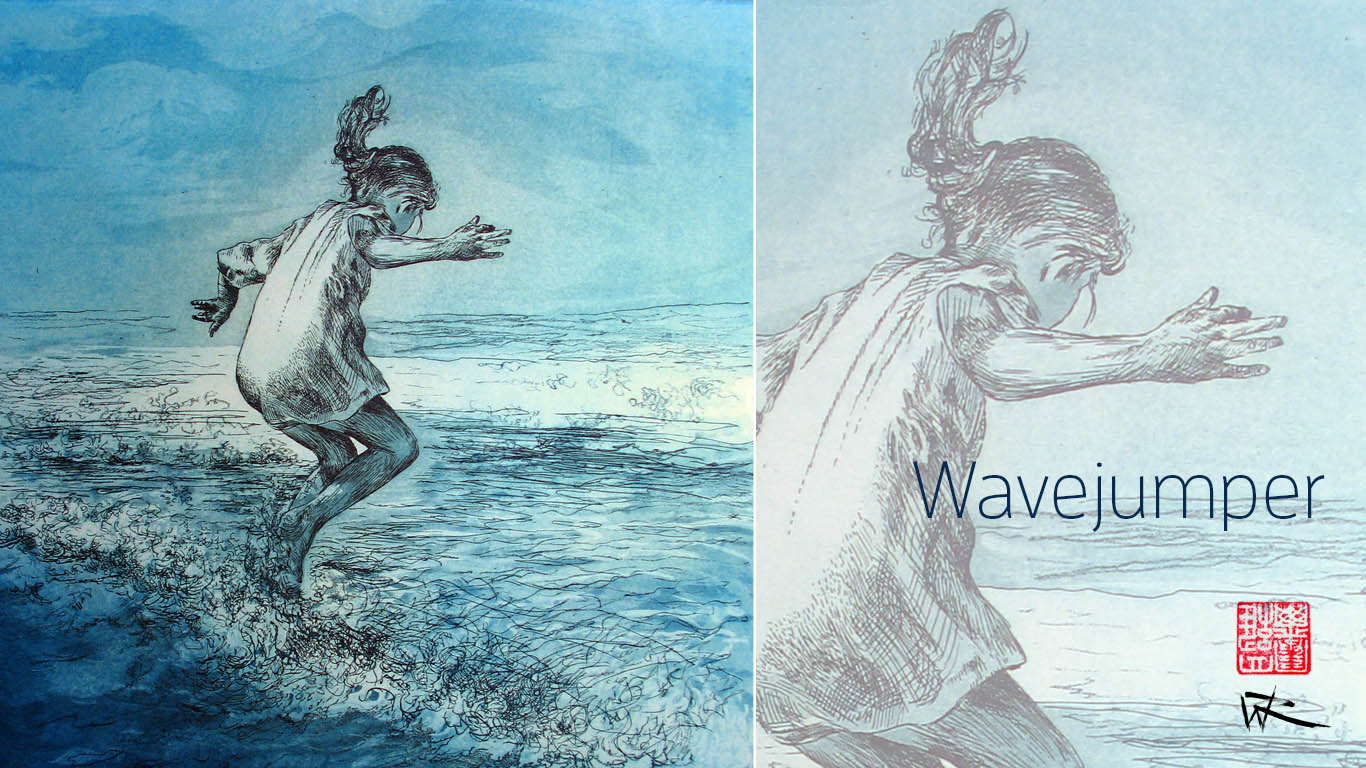 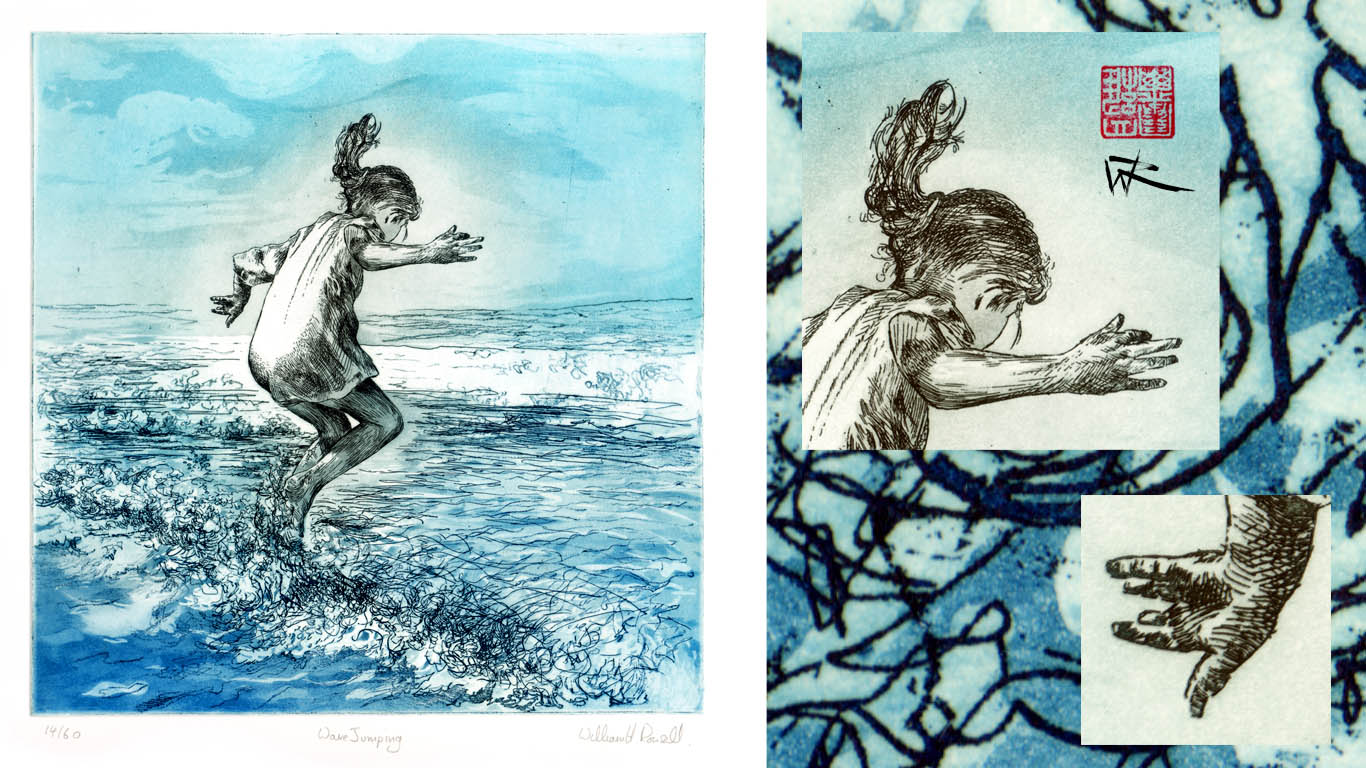 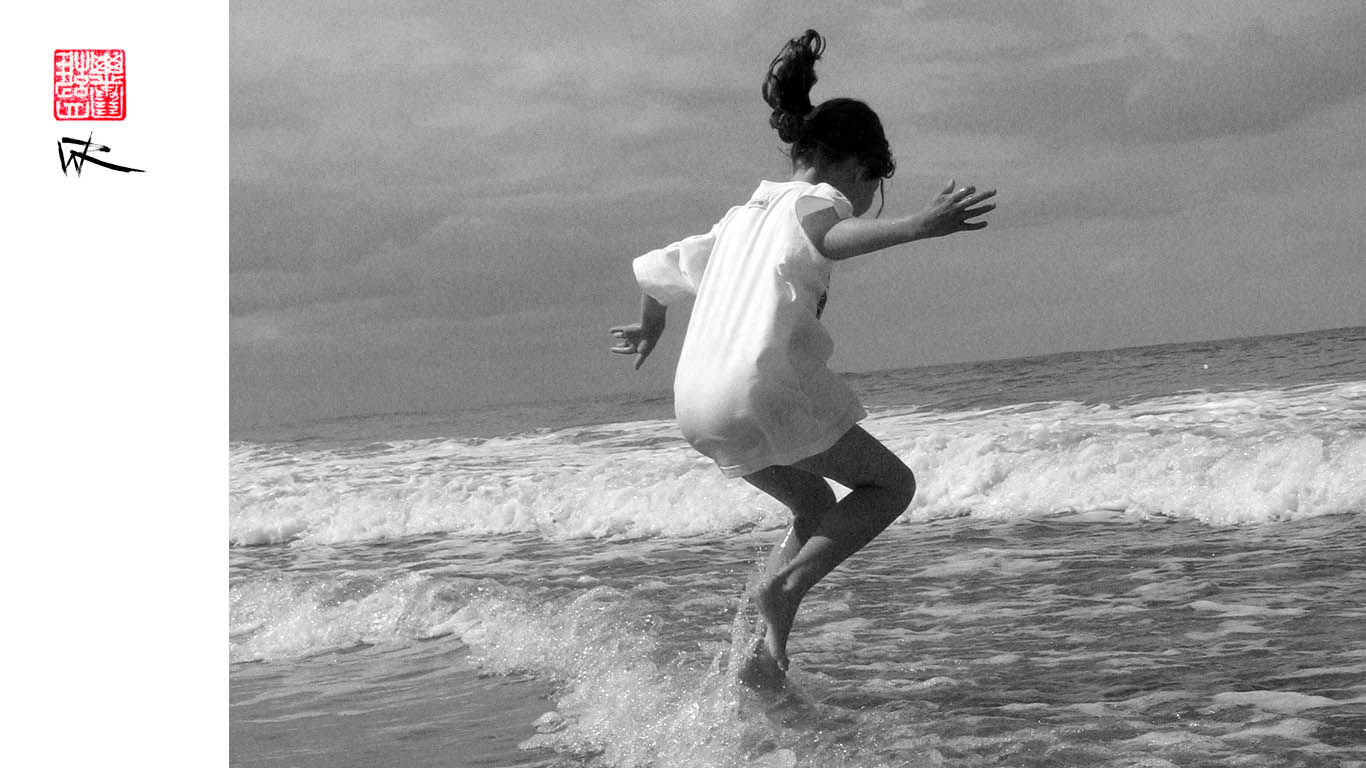 When my daughter was 8 we were on the beach at Wells-by-the-sea in Norfolk on our annual visit to my cousin. In time honoured fashion Izzy was jumping the waves as they rolled in.

Etching created with 2 copper plates printed on the Rochat press at Oxford Printmakers. The sea and sky are printed first on plate 1 using 3 tones of blue. Then the Figure and wave tones are printed in black using the second plate. The print is printed on to heavy Fabriano Rosapina paper and dried for a week in the drying racks at Oxford printmakers before signing and editioning.

Go to my Shop and pay by Paypal. 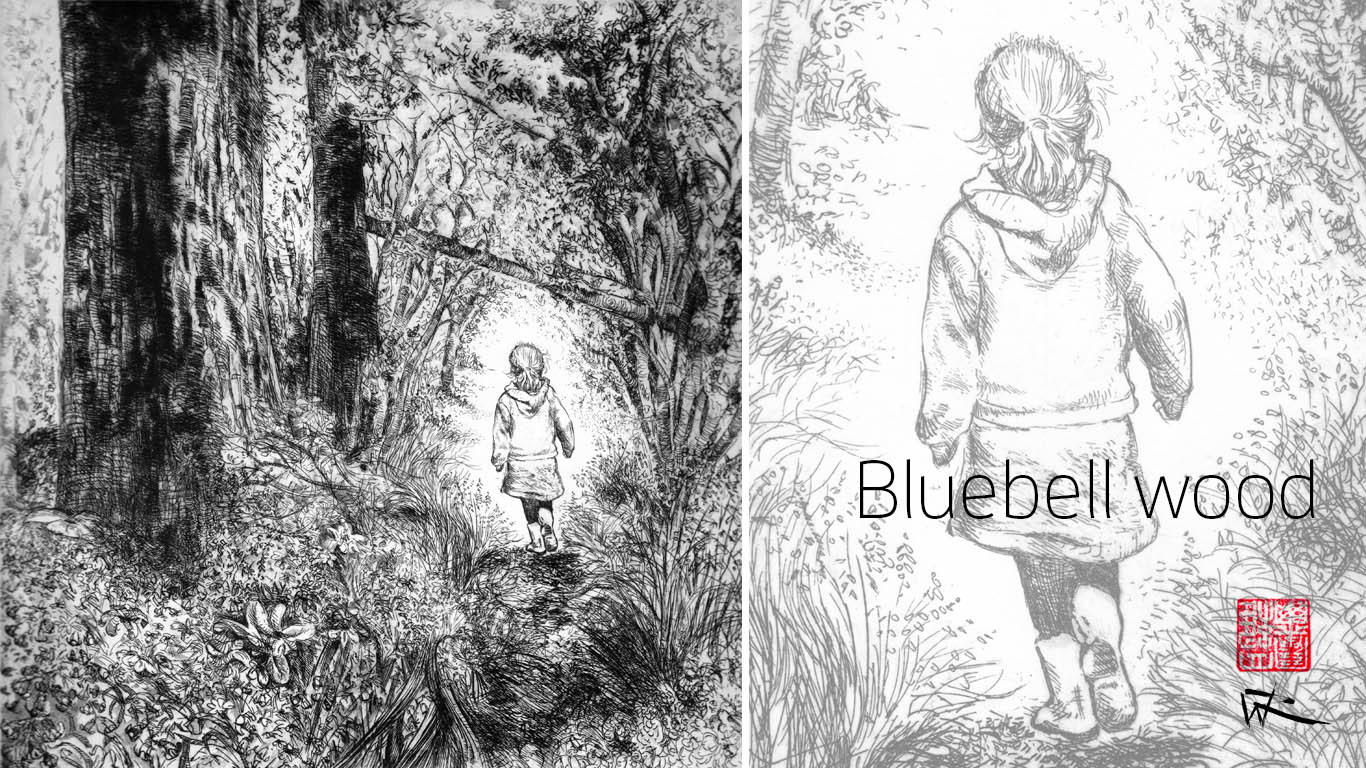 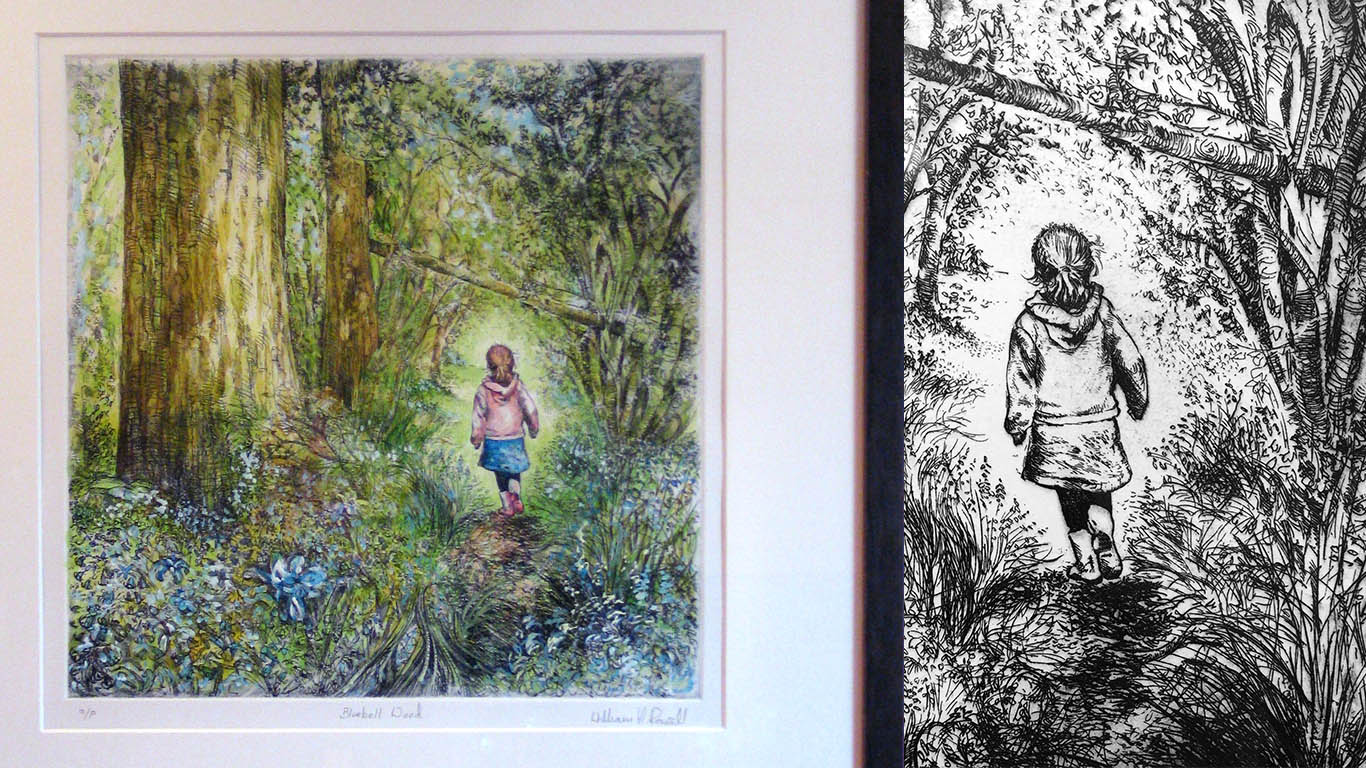 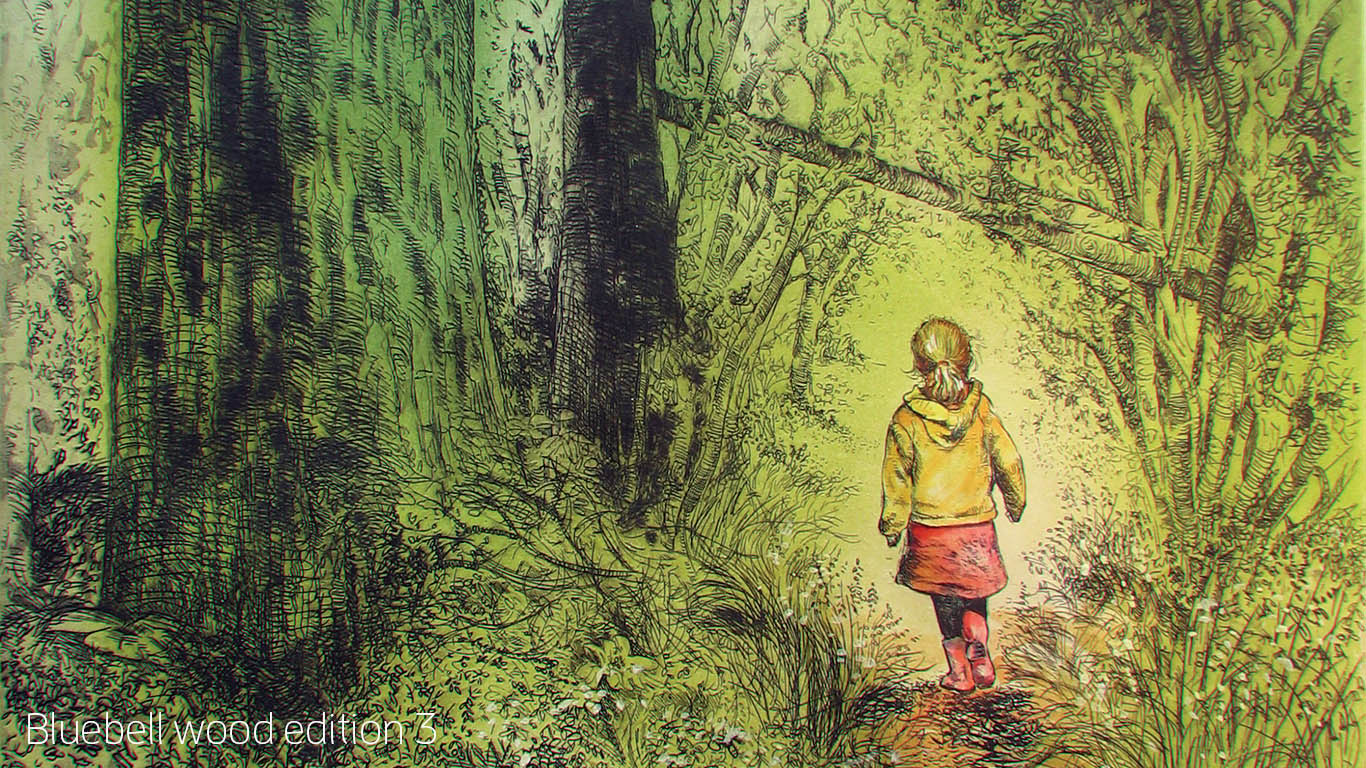 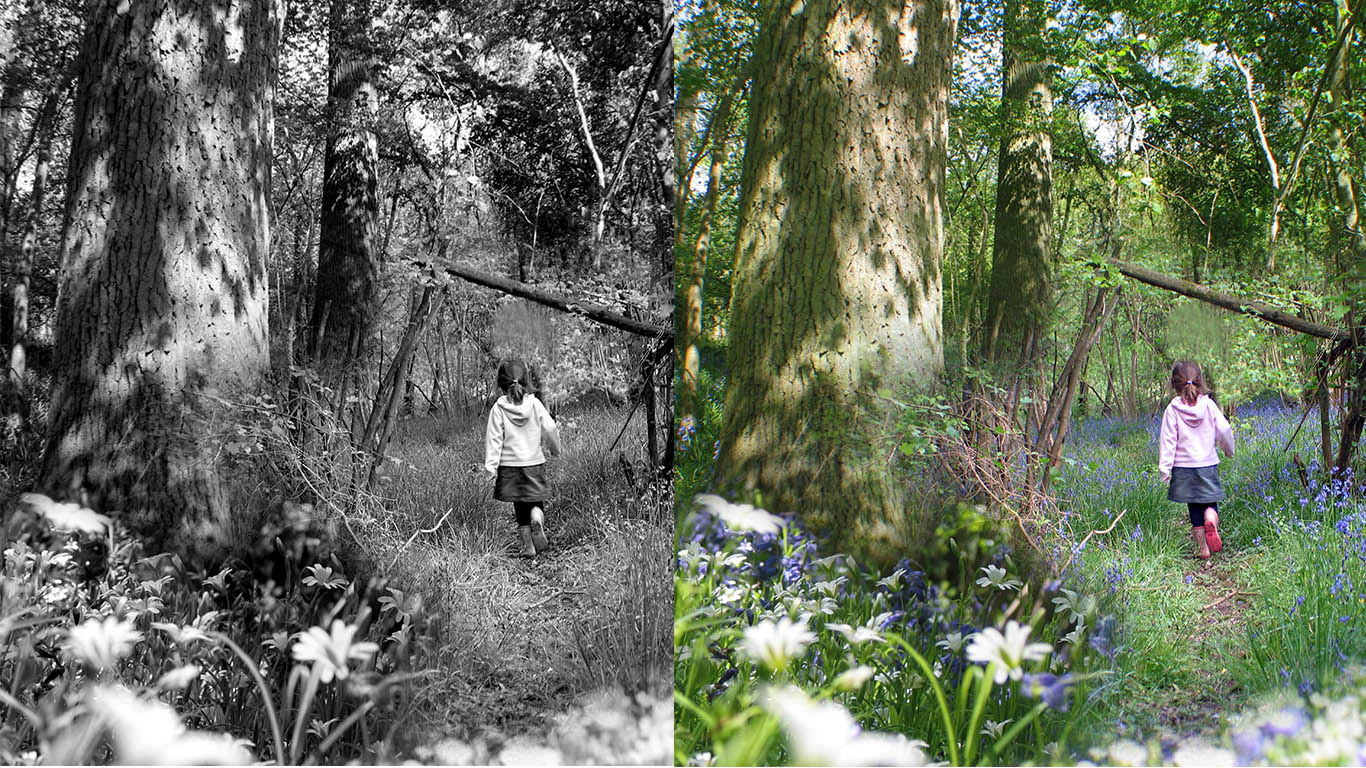 We used to live right next to a wood that was filled once a year with native bluebells. I used to walk regularly with my daughter through the woods. This image is a snapshot in time when she was 6 years old skipping along ahead of me in her hoodie and pink wellies. I hope this raises a smile with all parents as a reminder to those walks outside in our beautiful places in the Uk that we should cherish and protect.

This image was created using a traditional intaglio etching process at Oxford Print Workshop where I do all my printing. The image was printed on the Rochat press from a copper plate. The original image was drawn freehand on to the plate and etched using a hard ground acid resist process. The prints are hand printed on Fabriano paper. Two editions are available on white and Sepia coloured paper.

Edition prints available and can be purchased from my Shop. Payment by Paypal. 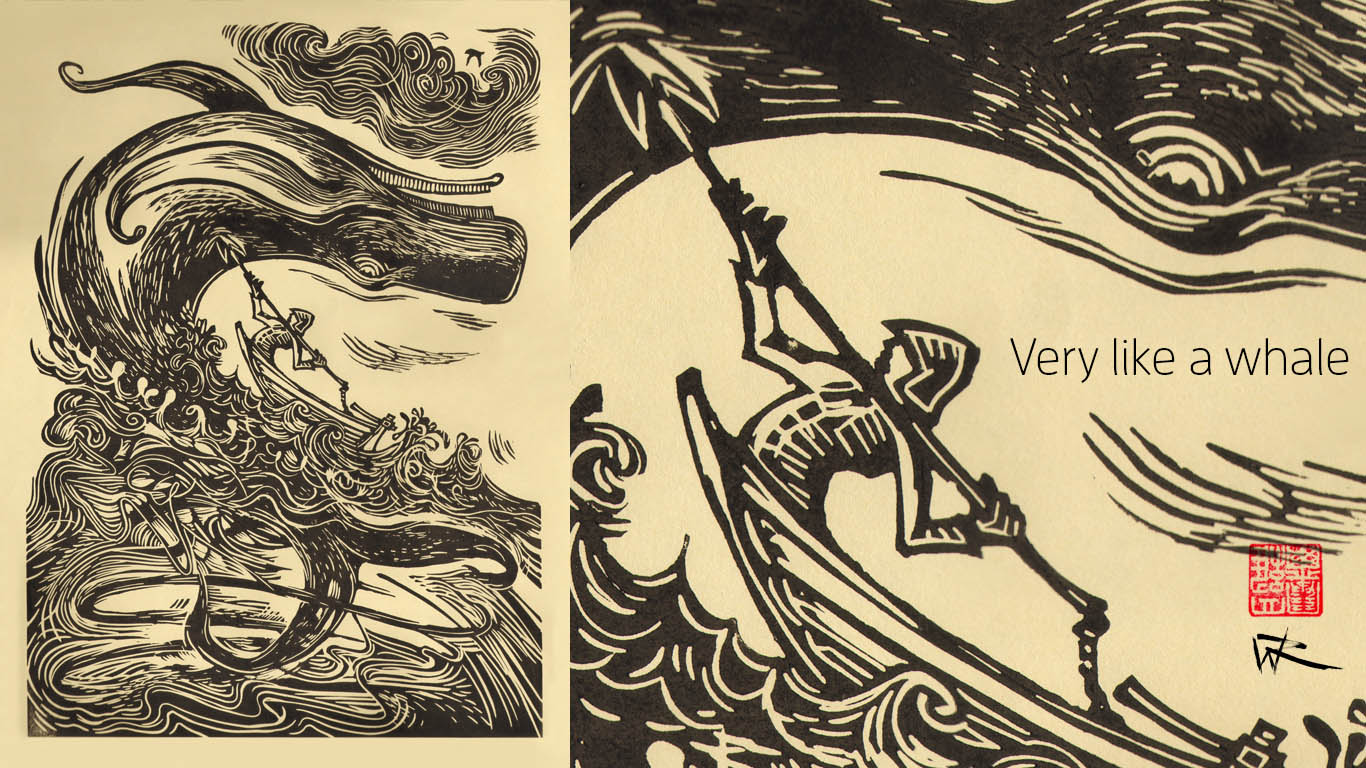 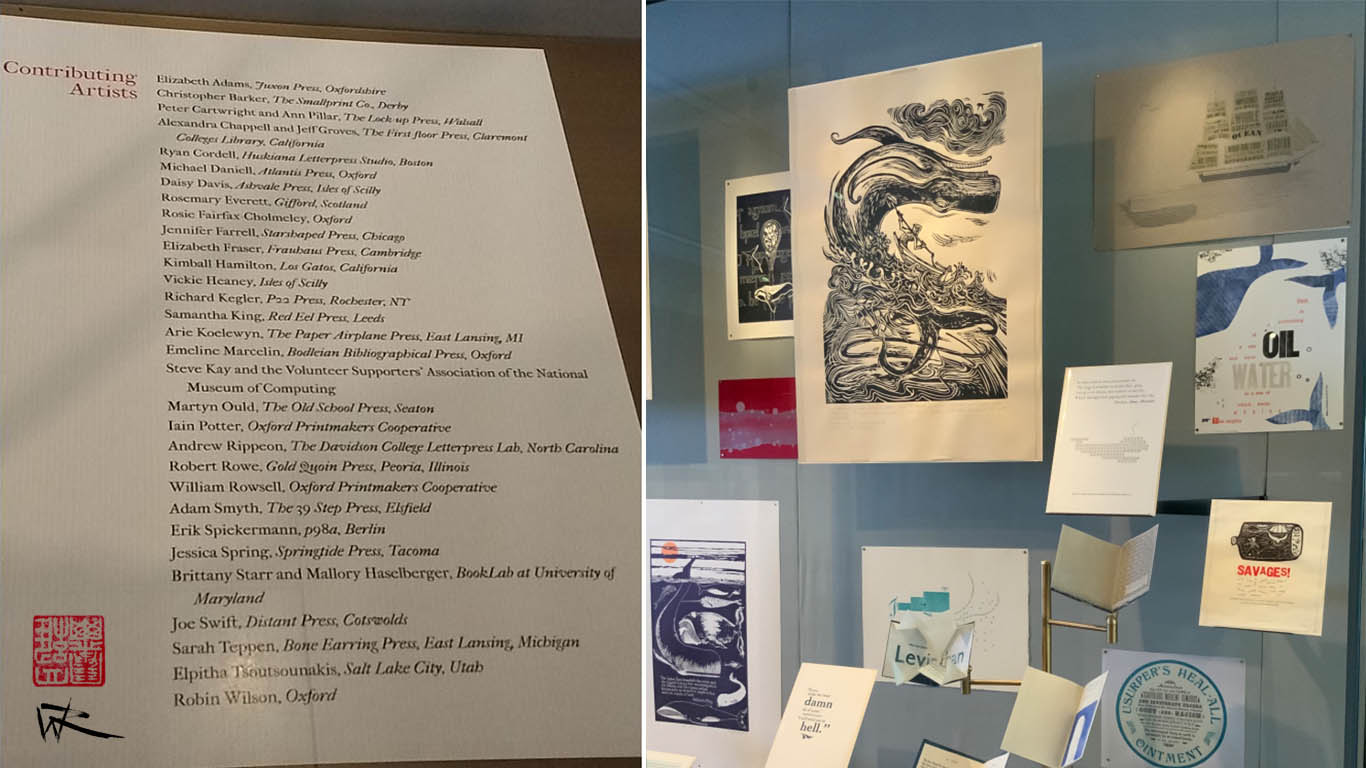 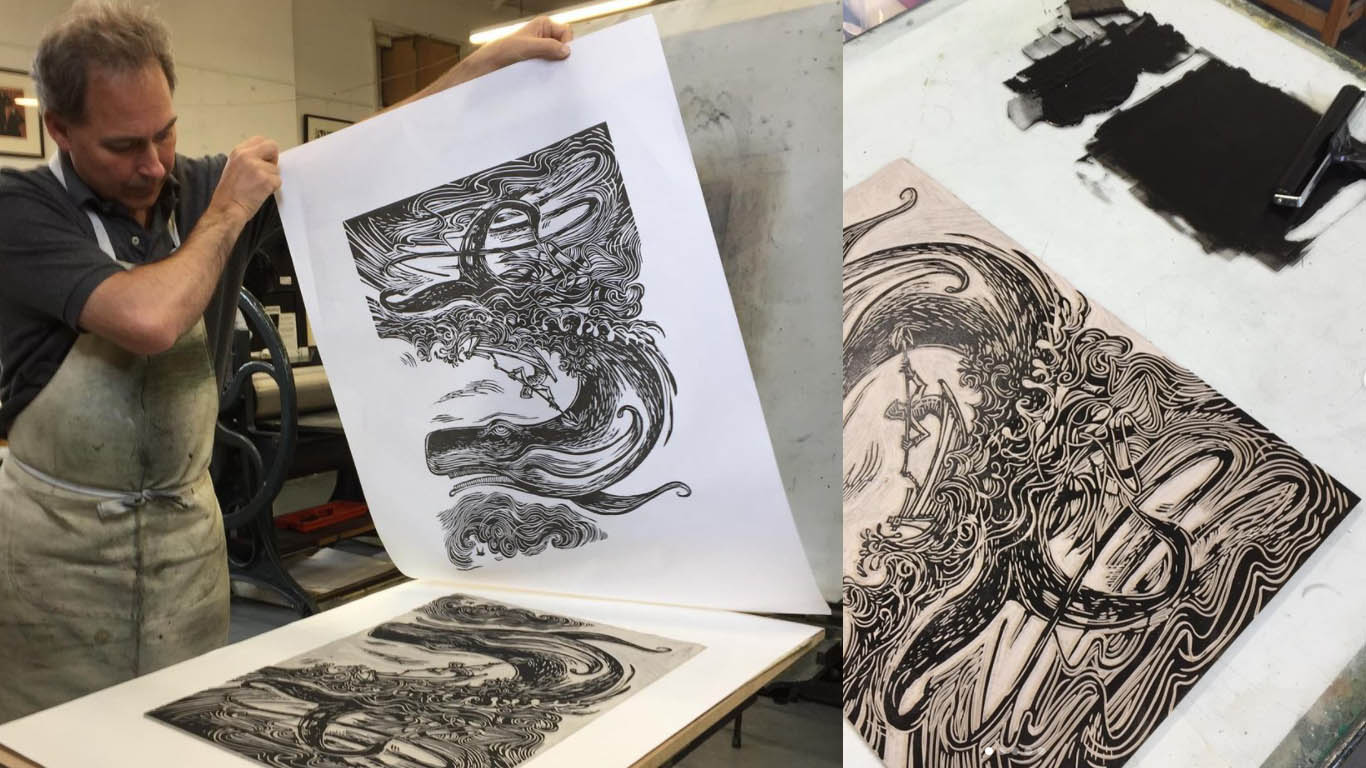 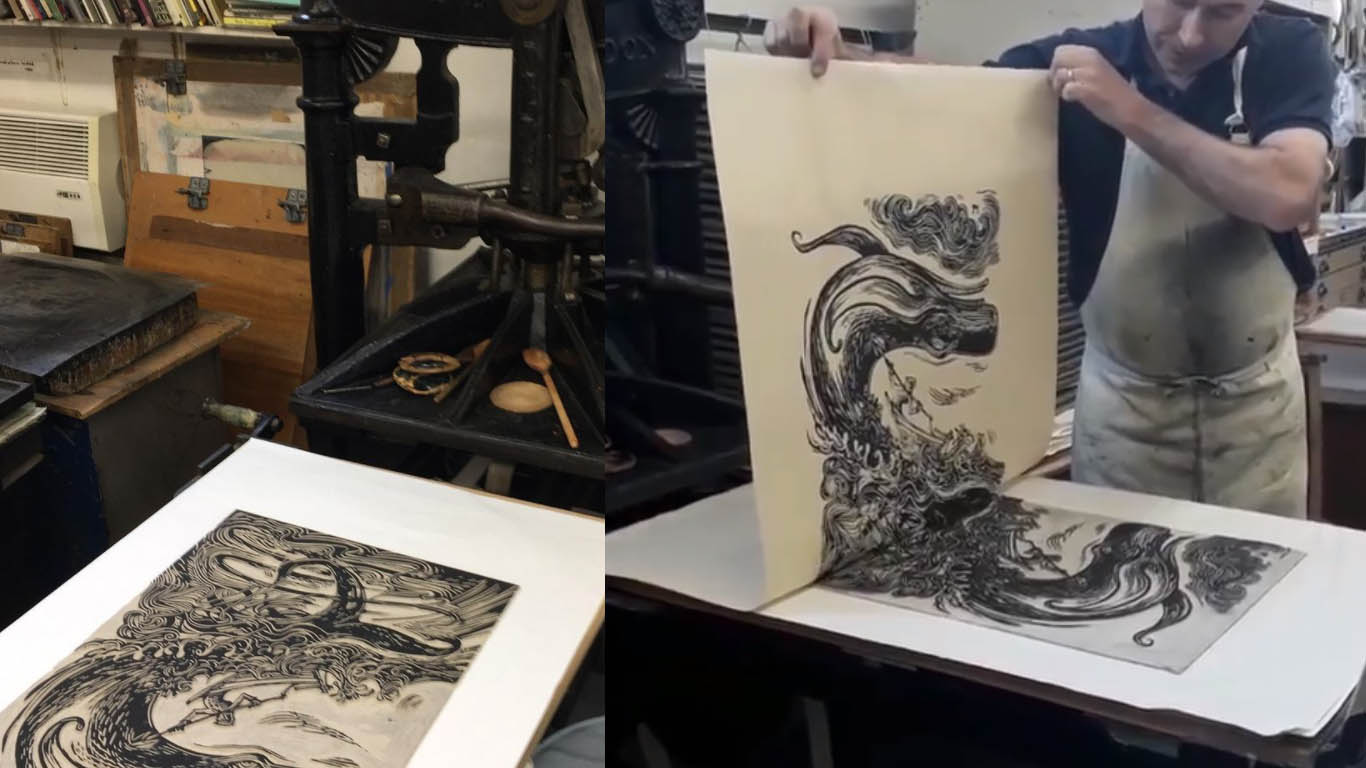 This print was created to mark 200 years since the birth of Herman Melville inspired by his most famous fictional creation, Moby-Dick.

For the 200th anniversary of Herman Melville’s birth (1819), the Bodleian’s Bibliographical Press invited letterpress printers and artists to claim one of the eighty prefatory “Extracts” from Moby-Dick (1851) and create an artwork in response.

The Blackwell Hall exhibition case accommodates thirty of the eighty contributors‘ artworks, plus the rare three-volume version of the novel published by Richard Bentley in London as The Whale before Harper & Brothers issued it in November 1851 in New York as Moby-Dick; or, The Whale. Here are just four of the outstanding prints among the several artforms on display.

Extract 65:  ‘Being once pursued by a whale which he had wounded, he parried the assault for some time with a lance; but the furious monster at length rushed on the boat; himself and comrades only being preserved by leaping into the water when they saw the onset was inevitable.’ ─ Missionary Journal of Tyerman and Bennett
Linocut on Japanese paper, printed on 1828 Albion press at the Oxford Printmakers Cooperative Workshop.

William Rowsell’s linocut represents the more traditional entries in the exhibition. Capturing the furious struggle expressed in the extract, he locks whale, man, boat, sea, cloud and sky into a vigorous, swirling image on a paper and in a style that evoke the century in which Moby-Dick is set. As he pulled his prints from the 1828 Albion printing press, William might have wondered what the nine-year old Herman Melville was doing when hands were first laid on that Albion.

I initially drew 3 cartoons in rough using a brush pen in black and white. Then I transferred the final drawing on to lino board using transfer paper. Then I spent 2 days cutting away the image from the lino board. The print was printed in water based inks on the Albion press in The Oxford Printmakers studio. There are currently 2 editions on sepia and white paper. I plan to do more editions experimenting with other coloured and textured papers in a range of other colours. Watch this space. If you have a color way you would like a special copy in, feel free to contact me to commission one off prints.

Go to my Shop and purchase by Paypal. Contact me directly if you need to use a different payment method? 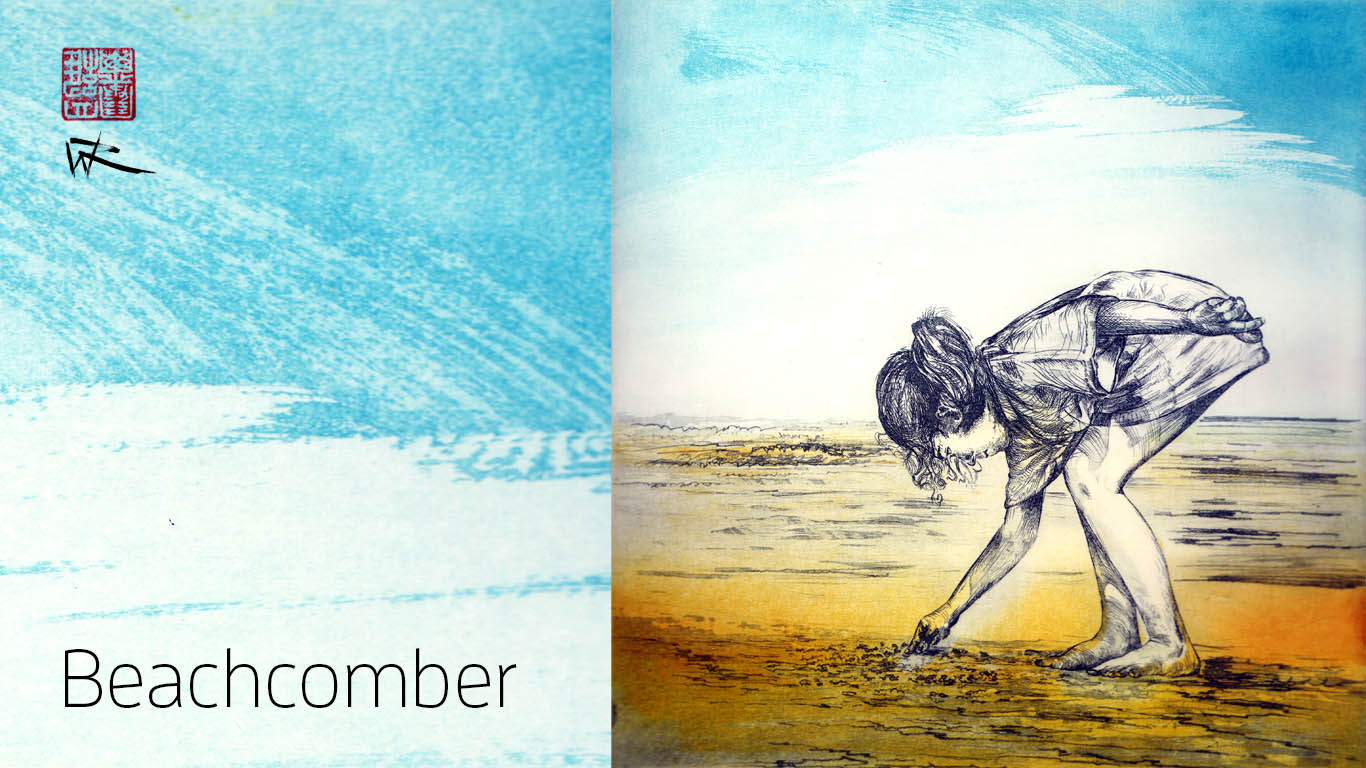 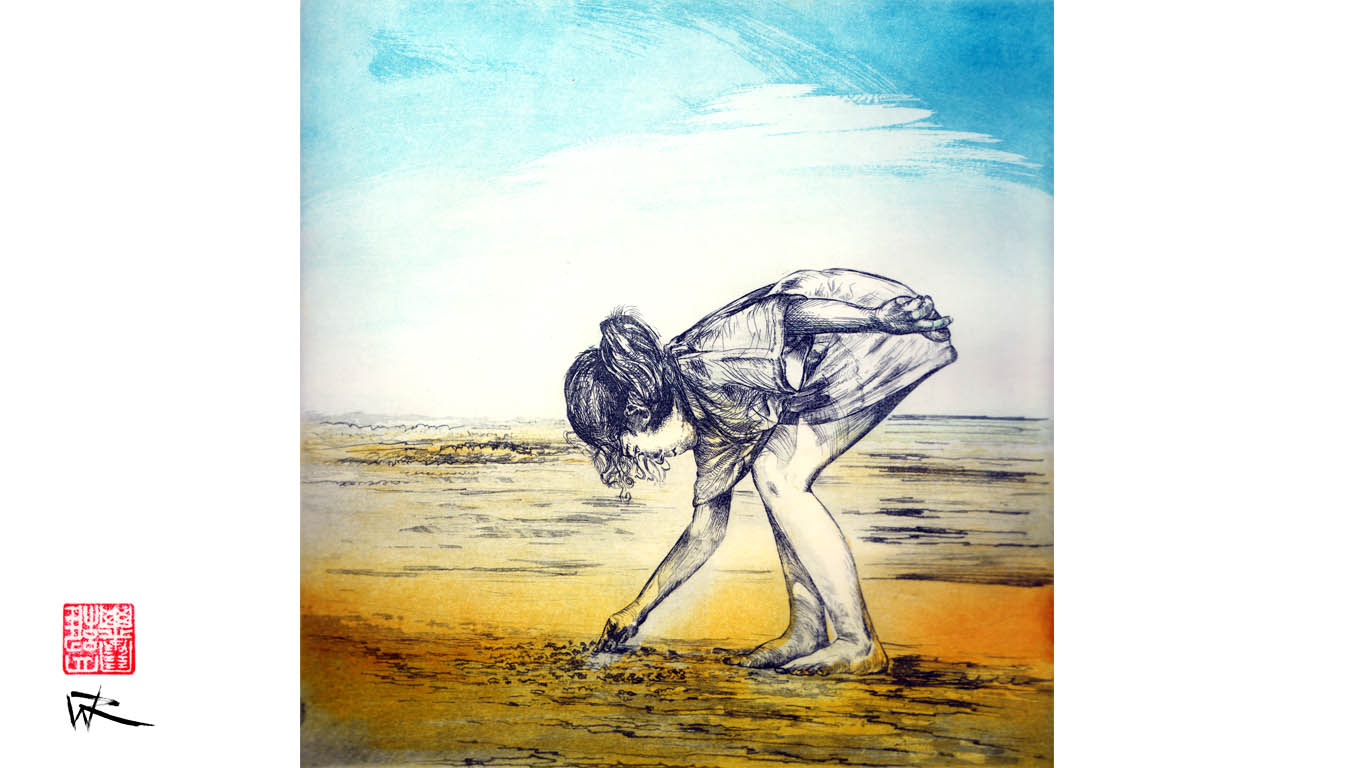 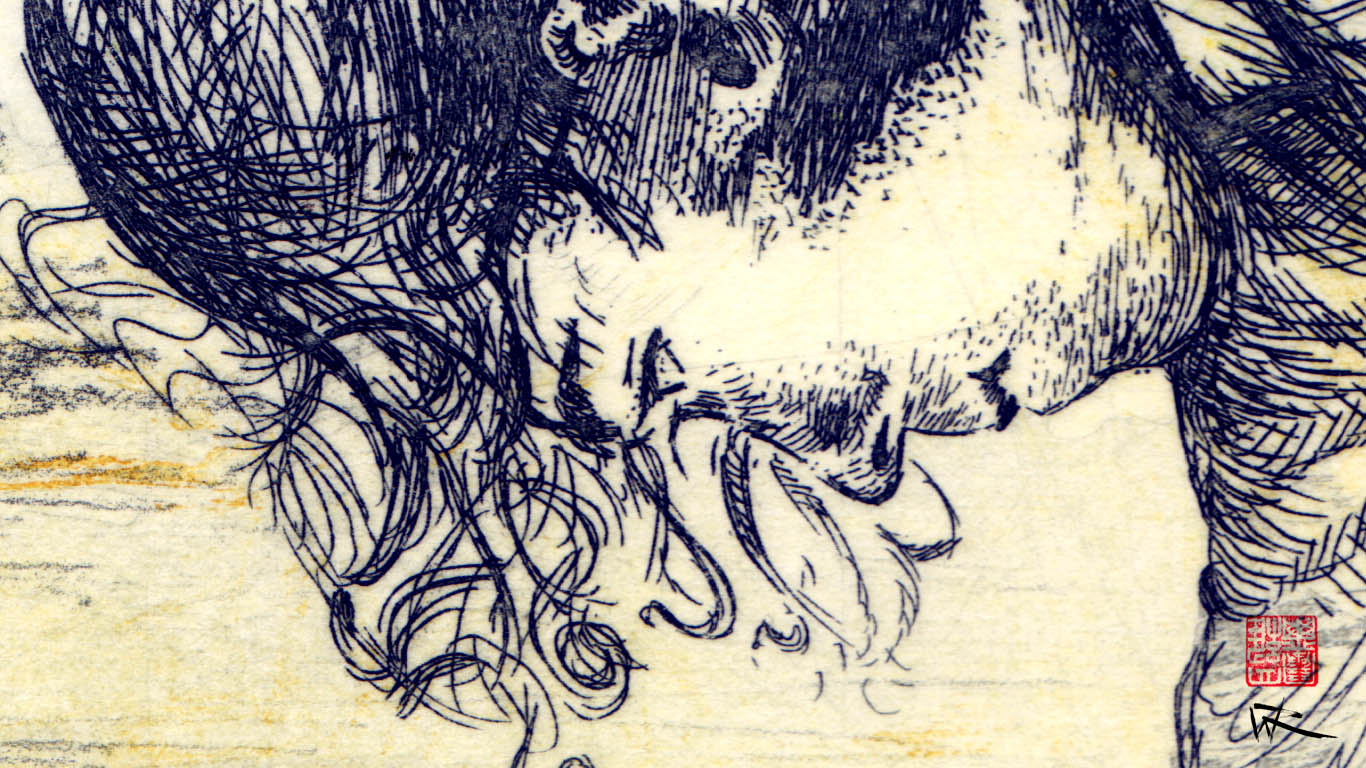 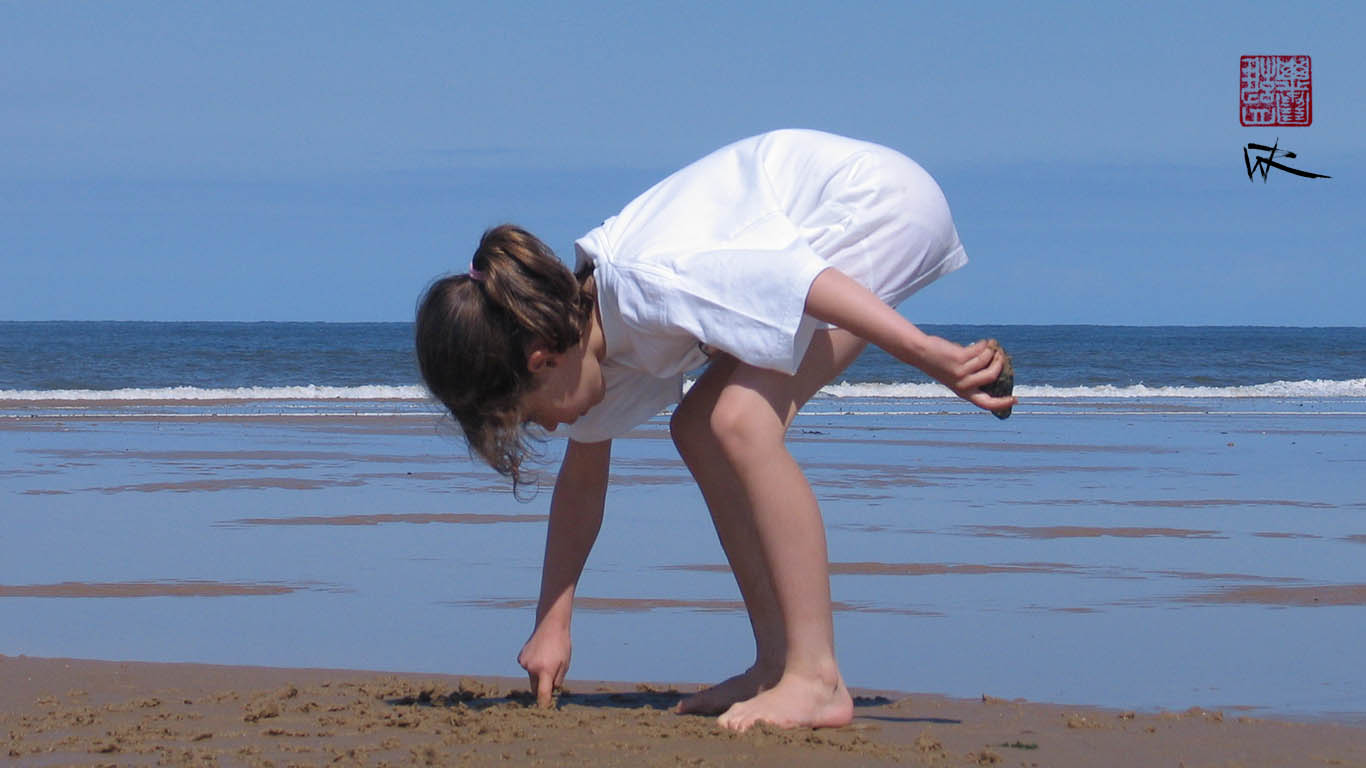 On our annual visit to Wells-Next-Sea on the North Norfolk coast when my daughter was young, we would forage for shells to add to the shell collection.

Available to purchase from my Shop.

Go to my Contact page for other buying and commission enquiries.